Healing by Giving Back to Others – Meet Cecilia O! 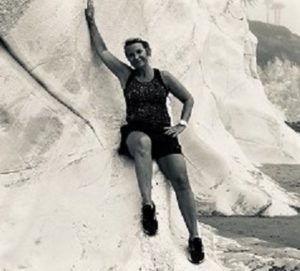 Cecilia O, 47, has worked for GE Healthcare for nearly a decade. But it wasn’t until she was diagnosed with breast cancer in 2015 that her job truly became her passion as she found herself, quite unexpectedly, transformed into an advocate for improving how women with breast cancer are treated.

“I’m on the other side as a survivor and experienced the heaviest treatment protocol one could imagine,” she said. “It was very hard to go through this, so I believe that as patients we have more to do and to learn to ensure we control our destiny as much as possible. We rely on technology and treatments, but I know we can empower women to heal better with fewer side effects.”

In fact, she discovered the lump herself. She then went through 15 surgeries, beginning with a lumpectomy, then a mastectomy, followed by chemotherapy and the heaviest radiation protocol available. Doctors told her that her type of cancer often spread to the second breast, so she asked to have a second mastectomy, even though no cancer had been found in that breast. “It was my choice to do the second one to relieve me from some stress,” she said. “Negative stress can be our worst enemy.”

Breast reconstruction also necessitated several surgeries due to complications. “It was a really, really difficult journey,” she said.

However, she says, having a positive mindset, a supportive workplace and colleagues, a loving husband and two daughters, and exercising regularly helped her manage any treatment-related side effects. “I could live a normal life with my two daughters and my husband,” she said. Although the girls are only 16 and 14, Cecilia has already talked to them about the importance of regular screening and knowing their own bodies.

Since her diagnosis, Cecilia has become a passionate spokesperson about the importance of communication between doctors and women with breast cancer. One area of focus is the waiting room. “You see the women who are frightened and yet know little about their situation,” she said.  “They don’t know what questions to ask the doctors and how to challenge them to seek reaffirmation of recommendations,” she said. Today, when she finds herself in a medical waiting room, she makes sure to engage with other women and openly discusses her own experiences to help put them at ease.

“They realize this can become a more positive and easier journey” she said.

GE Healthcare, which makes and sells mammography machines, supports her efforts by allowing her to spend time working with the global mammography team to ensure it considers the patient experience in everything it does. “It’s not just the machine,” she said. “It’s everything we should do, as a company like ours, such as a waiting room experience, applications, artificial intelligence, and education for engineering and technologists, so they understand more about the patients’ different backgrounds and where they are in their journey.”

Cecilia also focuses on the medical professional, challenging them in their thinking about the patient experience and sharing stories about what she and other patients feel.

Her efforts were on display during the recent Radiological Society of North America annual meeting in Chicago. She sat in a version of GE Healthcare’s own MyWaitingRoom, with soft lighting, comfortable chairs, and the SensorySuite video screen showing nature scenes and new fragrances designed to help women relax. Studies find such offerings with images and fragrances can reduce stress and improve the patient experience

“I am so excited,” she said as she sat in the space she helped create. Doctors from China, India, Belgium, and Jamaica had already talked with her about coming to their hospitals to spread her positivity, her experience as a patient, and to communicate to other women about the importance of screening. They also asked her to help design their own waiting room spaces.

Speaking to women and healthcare professionals around the world about all she has learned from her own journey is her own therapy and victory, Cecilia says. “I could spend all my time doing only this,” she said. “This is my dream.”

What Are You Doing on World Cancer Day?

When Your Doctor Needs a Better View

Your email address will not be published. Required fields are marked *

Senographe Pristina is a prescription medical devices limited to sale, distribution, or use, to or on the order of a physician. Medical device imaging is not without risk. Please discuss the risks and benefits associated with mammography with your healthcare professional.